How do states develop and test chemical weapons? 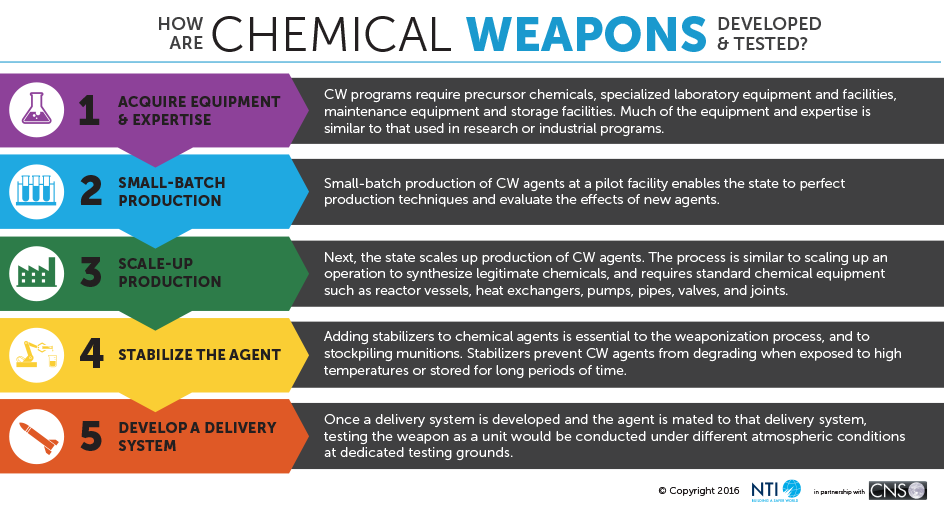 Small-batch production of CW agents at a pilot facility enables the state to perfect production techniques and evaluate the effects of new agents.

Next, the state scales up production of CW agents. The process is similar to scaling up an operation to synthesize legitimate chemicals, and requires standard chemical equipment such as reactor vessels, heat exchangers, pumps, pipes, valves, and joints.

Adding stabilizers to chemical agents is essential to the weaponization process, and to stockpiling munitions. Stabilizers prevent CW agents from degrading when exposed to high temperatures or stored for long periods of time.

Once a delivery system is developed and the agent is mated to that delivery system, testing the weapon as a unit would be conducted under different atmospheric conditions at dedicated testing grounds. [1]

How difficult is it for states to acquire chemical weapons?

Can chemical weapons be stockpiled for later use?

Yes. During the Cold War the United States and the Soviet Union successfully stockpiled tens of thousands of tons of CW agents. However, it is not an easy task:

Binary munitions contain two separate canisters filled with relatively non-toxic precursor chemicals. Once the fuse ignites, it detonates a burster, which causes the first precursor canister to break a separator, or burster plate, and crash into the second precursor canister. The two precursors then react to produce a lethal chemical agent.

Unitary chemical munitions are filled with agents at a loading facility before being stored and transported. A fuse is the only thing needed before use.

Below is a rotatable annotated model of a chemical munition.

How are chemical agents delivered to a target?

Chemical agents can be delivered to a target through a variety of methods, usually categorized by how they disperse the agent. Delivery methods fall into two broad categories: point sources and line sources.

During the Cold War, the United States equipped the Honest John missile with a warhead containing “bomblets” filled with sarin. The Soviet Union also produced ballistic missile delivery systems for CW agents, including the Scud-C variant.

Below is a rotatable annotated model showing how a missile can be used to deliver chemical weapons, in this case sarin bomblets. 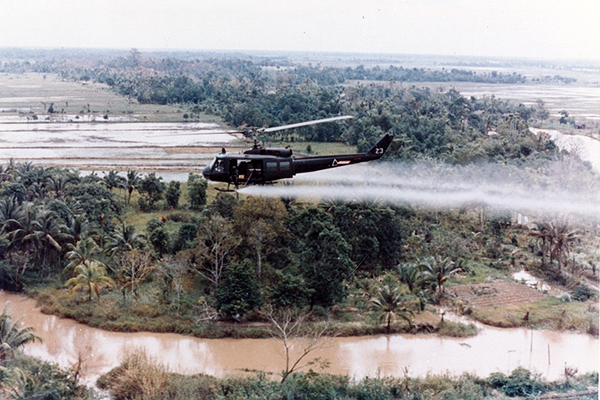 Are there effective defenses or antidotes to counter chemical weapons use?

It depends on the agent used. If adequate defensive measures can be taken, these are generally preferable to and more effective than antidotes. Antidotes only exist for some types of CW, cannot undo damage that has already been done, and are only effective in preventing further damage if administered promptly after exposure. [5] 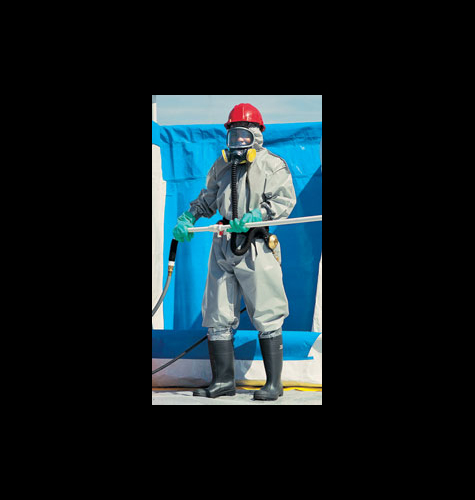 Typically, protective clothing includes a mask or suit made from an impenetrable substance such as rubber.
Full Chemical Weapons Suit | Photo Credit: www.cdc.gov 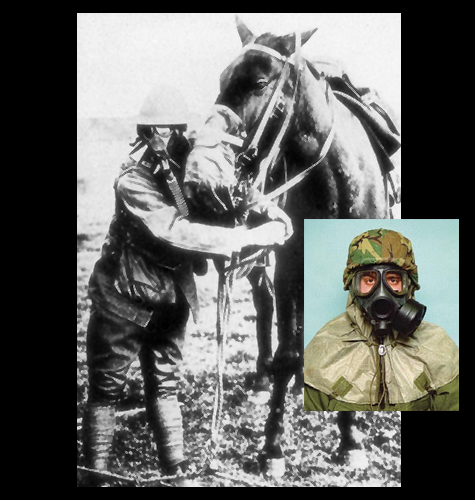 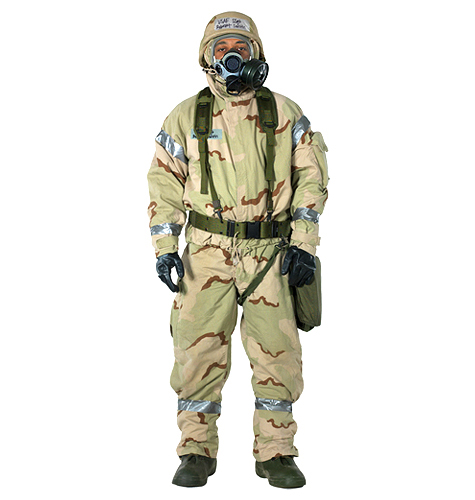 Protective clothing has greatly improved since the first uses of chemical weapons, but such gear is extremely hot and constricting. More permeable options containing carbon layers have been developed. The carbon is either in the form of polyurethane foam or particles, and permits water vapor released from the body to pass through while absorbing CW agents.
Military Gear, Mission Oriented Protective Posture (MOPP) | Photo Credit: U.S. Department of Health and Human Services 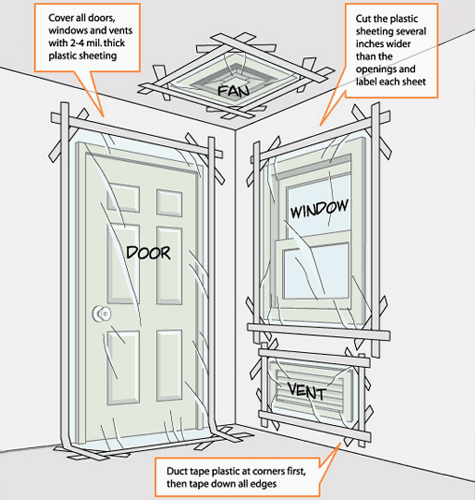 In addition to protective clothing, shelter-in-place procedures can reduce exposure to chemical agents. If an aerosolized agent is dispersed over a residential neighborhood, sealing the structure and remaining inside reduces contamination.
Creating a Safe Room | Photo Credit: www.lexingtonky.gov

Most chemical agents are absorbed rapidly through the skin. If no protective clothing is worn, decontamination is essential, ideally immediately following exposure. Decontamination includes thoroughly washing the body and clothing. 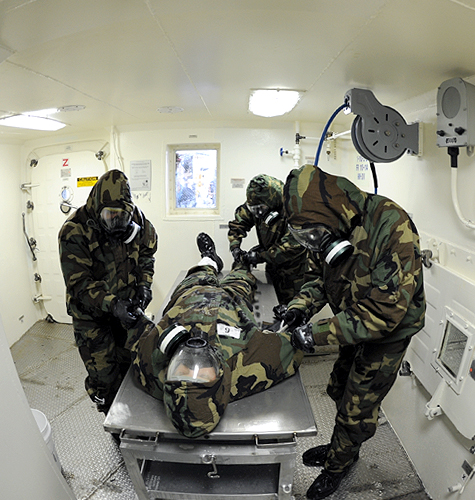 For blister agents, thoroughly washing all exposed areas—eyes and skin—is the only effective means of decreasing external tissue damage. If the blister agent is inhaled or ingested, removing the patient from the area of exposure, ensuring an unobstructed airway, and seeking medical treatment are the best options available.

There are antidotes for some, but not all, blood and nerve agents. No antidotes for blister agents exist. Antidotes must be administered very soon after exposure in order to be effective.

Increase the supply of oxygen to the bloodstream 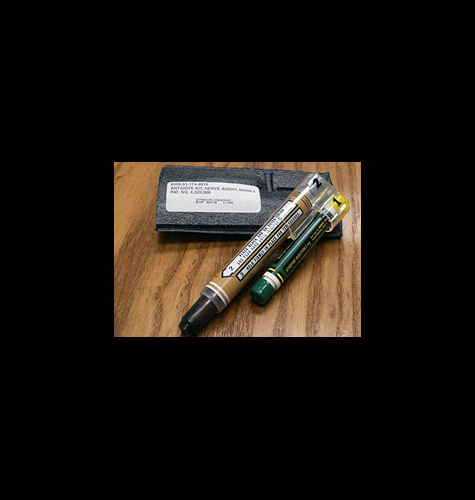 An injection of two active components: