What is the International Atomic Energy Agency (IAEA)?

What are IAEA safeguards?

What is the relationship between the IAEA and the nuclear nonproliferation regime’s treaties?

What types of nuclear materials and facilities are under safeguards?

Uranium and plutonium in various forms are the chief nuclear materials under safeguards. Thorium-related activities must also be placed under safeguards, but since no country currently operates a thorium-based fuel cycle at a commercial (rather than research) level, it is not currently a safeguards priority. The below diagram depicts the uranium-plutonium civil nuclear fuel cycle (though most countries only have some of its components). It clarifies which stages of a non-nuclear-weapon state’s fuel cycle fall under a CSA, and which are only under IAEA safeguards if the country has concluded an additional protocol. 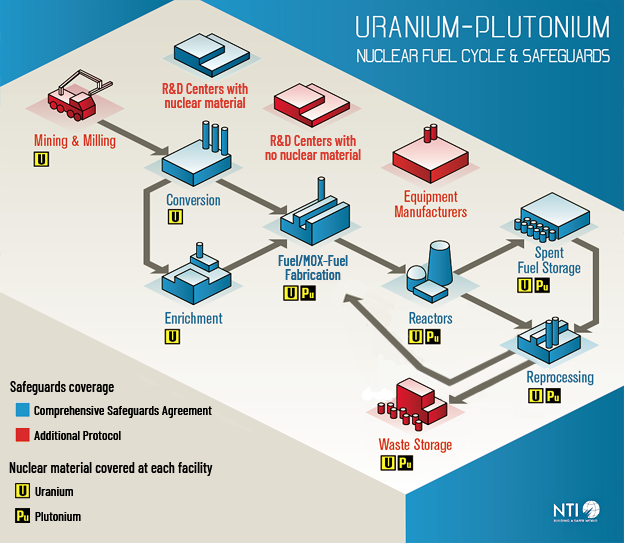 How do safeguards work?

The application of IAEA safeguards is an ongoing process consisting of several steps:

What types of safeguards agreements exist?

Safeguards predate the NPT and arose in the 1950s as part of project and supply agreements to verify that nuclear materials and technologies transferred under programs such as U.S. Atoms for Peace remained in peaceful use. Following the NPT’s 1970 entry-into-force, CSAs became mandatory for all NPT non-nuclear-weapon states. In the 1990s, the discovery of Iraq’s clandestine nuclear weapons program, South Africa’s declaration of the dismantlement of its secret nuclear weapons program, and the failure of the DPRK to provide timely and accurate declarations about its nuclear activities and subsequent refusal to cooperate with the IAEA demonstrated that the IAEA required additional tools to provide assurances about the absence of undeclared nuclear material. This gave rise to the program to strengthen IAEA safeguards and adoption, in 1997, of Model Additional Protocol. Below is a summary of existing types of safeguards agreements.

What are examples of safeguards activities?

What are the current safeguards challenges?