What are nuclear weapons? 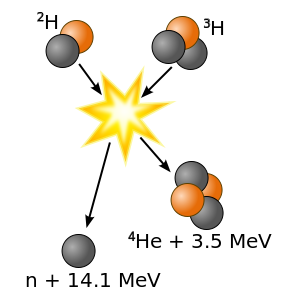 How are nuclear weapons different from conventional weapons? 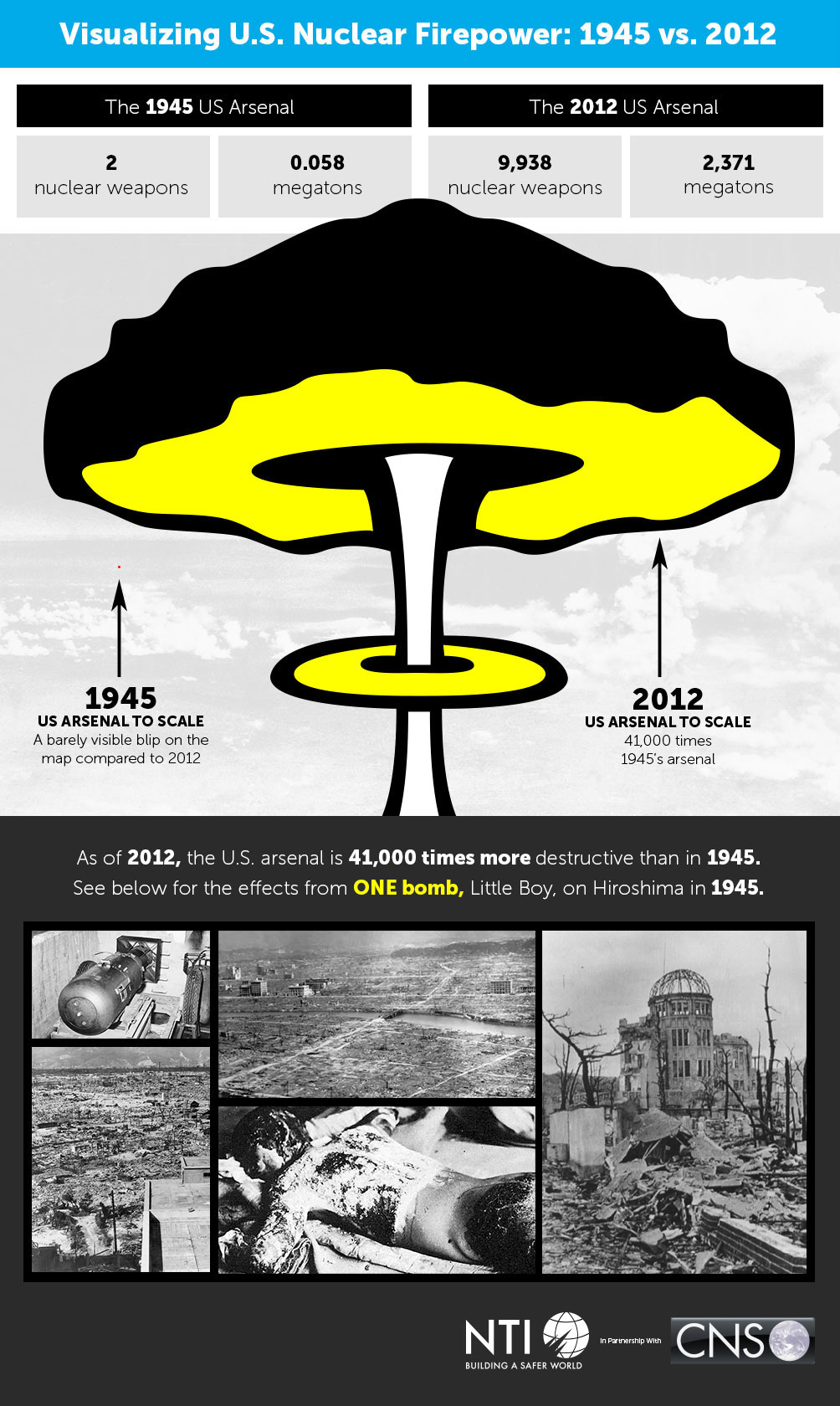 Slideshow: Effects of a Nuclear Explosion 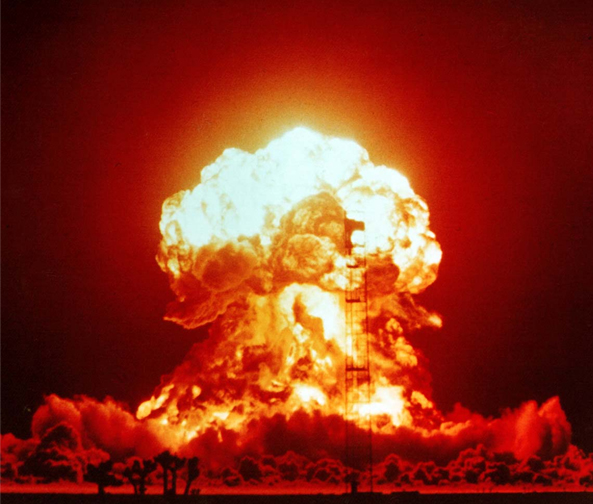 When a nuclear bomb explodes, an enormous fireball of hot gases begins to form in less than a millionth of a second. The formation of the fireball—seen as a mushroom cloud—triggers the destructive effects of a nuclear explosion.

The rapidly expanding fireball heats and compresses the surrounding air, causing a blast wave to form and move outward from the fireball. The blast wave generates a strong wind far more powerful than any hurricane, and immense pressure. The blast wave causes many of the most visible effects of a nuclear explosion, destroying or damaging buildings and infrastructure. About 50 percent of the energy released from a nuclear explosion comes from the blast effects. 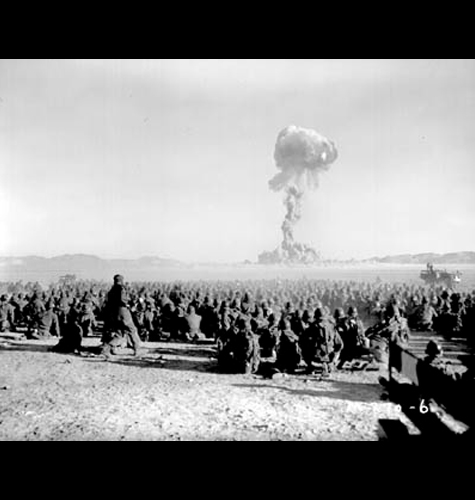 The fireball emits intense heat and light (known as thermal radiation), accounting for roughly 35 percent of the energy released in a nuclear explosion. Even an observer 50km away from the fireball will suffer permanent retina damage. Temperatures at ground zero briefly exceed 3,000°C, causing massive firestorms (fires so intense they create hurricane-force winds). The fires produce carbon dioxide, which is heavier than air and settles along the ground, asphyxiating all living things in proximity to the fires. 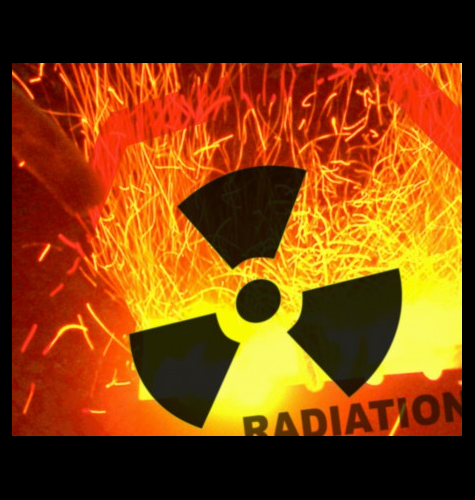 The explosion generates two types of nuclear radiation, prompt radiation and delayed radiation which together account for about 15 percent of the energy released.

Prompt radiation is released within the first minute of the explosion, and can cause radiation sickness resulting in death, or increase survivors’ risks for cancers later in life. It affects people directly beneath the fireball. 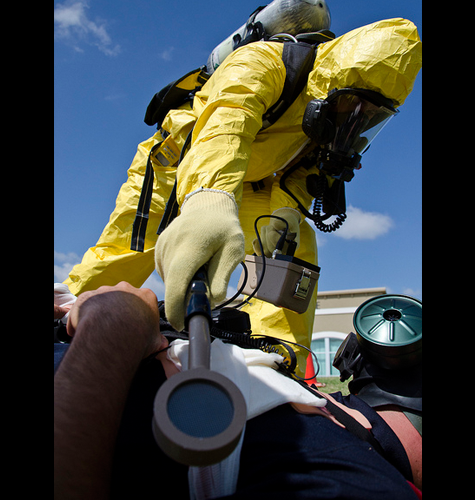 Delayed radiation results from the radioactive fission fragments and large amounts of pulverized debris, known as fallout, which is drawn up into the mushroom cloud following the explosion. Climbing high into the atmosphere, radioactive fallout eventually drops, and dependent on weather patterns, can spread over very large geographic areas. The fallout damages organisms’ tissues and contaminates food, soil, and water supplies. 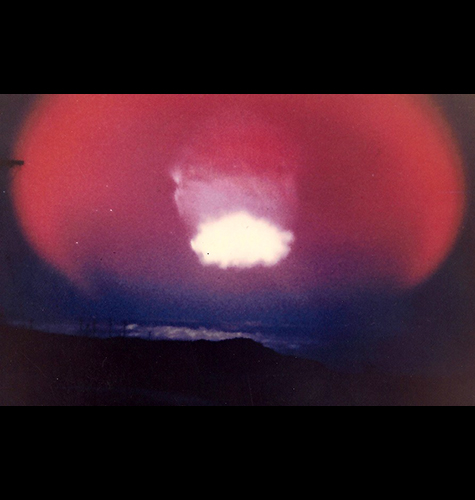 A nuclear weapon will also generate an electromagnetic pulse (EMP) effect lasting only a few seconds after detonation. An EMP is not believed to cause damage to the human body, but can damage or disrupt electronic equipment. For example, studies have suggested that a single nuclear detonation at high-altitude over the United States could seriously affect the country’s communications infrastructure, and potentially shut down the entire power grid. [2]

What are the different kinds of nuclear weapons? 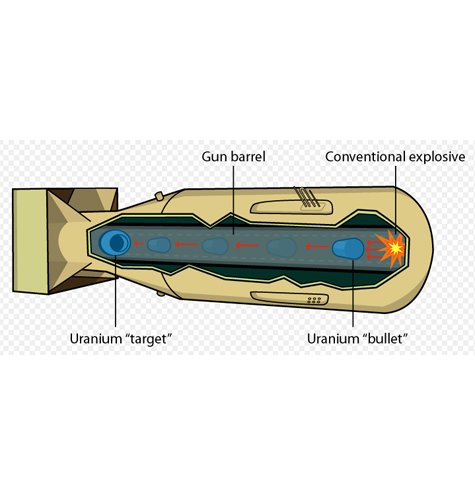 A gun-type bomb is the simplest of all nuclear weapon designs. The “Little Boy” bomb the U.S. detonated over Hiroshima, Japan on August 9, 1945 was a gun-type bomb.

Conventional explosives are used to shoot one piece of uranium-235 into another to form a critical mass. The impact generates a burst of neutrons, causing an uncontrolled, and explosive, fission chain reaction.

Gun-type bombs can only use highly enriched uranium. Plutonium’s physical properties are such that a gun-type device cannot combine two pieces of plutonium fast enough to form a critical mass. 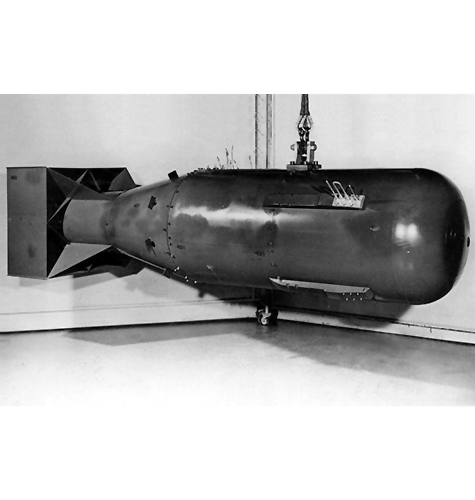 Gun-type bombs require larger amounts of enriched uranium than the more efficient implosion design, making them a relatively heavier and bulkier design. For example, Little Boy contained 64 kg of enriched uranium, and the bomb was over ten feet long and weighed about four tons.

In the 21st century, gun-type designs are unlikely to be attractive to countries that currently possess or are seeking nuclear weapons, since they cannot be placed atop long-range missiles. 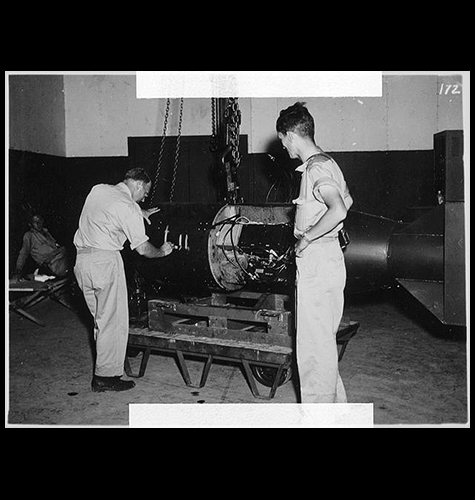 The gun-type bomb is the most likely design to be pursued by non-state actors, who could likely build one if they were able to acquire enough highly enriched uranium. Much of the design information is in the open literature, and the design is so simple that it does not need to be tested prior to use. The United States never tested the Little Boy design before using the bomb during World War II. Non-state actors also might not mind a bulkier design, which could be delivered to a target using a truck or shipping container. 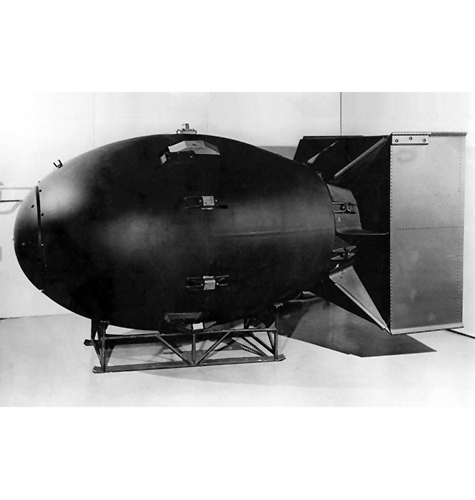 Other nuclear weapon states have reportedly started their programs with implosion rather than gun-type designs, except for South Africa. In the 1980s, the pro-apartheid government in South Africa built six gun-type weapons and had started constructing a seventh before dismantling them in the early 1990s. 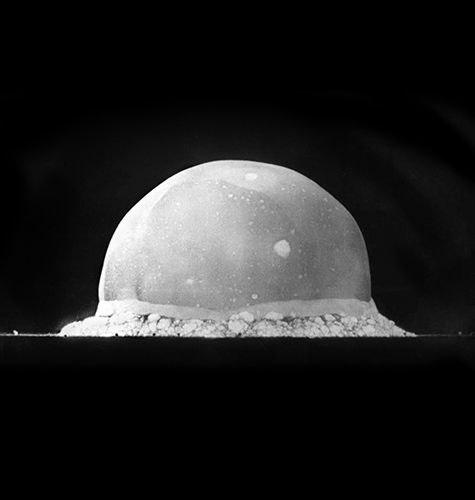 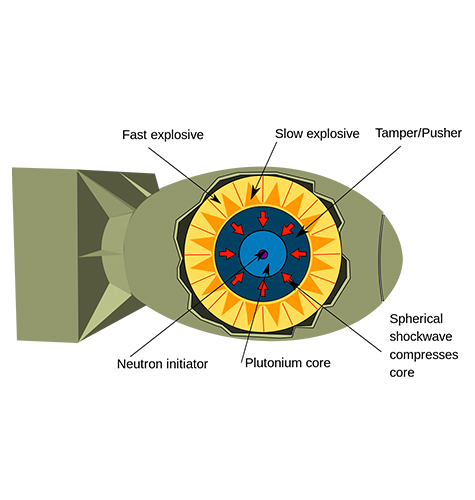 An implosion bomb detonates conventional explosives around a spherical shell of plutonium or HEU, known as the pit, which compresses the material into a tight sphere.

An implosion bomb can fizzle—or fail to achieve criticality—if the conventional explosives around the plutonium pit do not detonate simultaneously and uniformly. As such, engineering an implosion bomb is much more challenging than constructing a gun-type device. It requires significant expertise, precision manufacturing, and extensive testing. 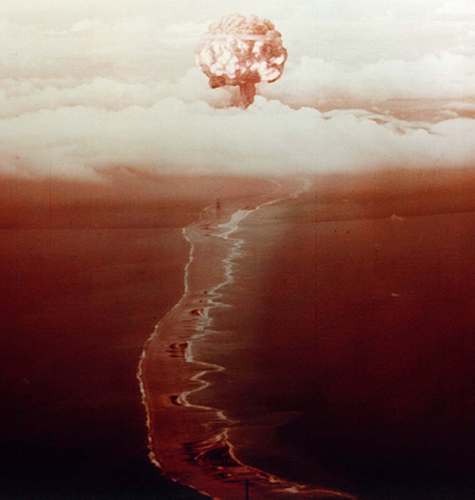 Early nuclear weapons were inefficient, and would blow up before a substantial portion of their fissile material had fissioned, resulting in smaller yield explosions than would otherwise be possible. To fission more material, weapons designers added a few grams of Deuterium-Tritium gas inside the core of an implosion device. This technique, known as boosting, improved overall efficiency, enabling weapons designers to decrease the size and weight of bombs without decreasing their yields. When fission begins and the temperature increases, nuclei of the Deuterium-Tritium gas fuse (a process known as fusion), flooding the core with a burst of high-energy neutrons that fission the surrounding material more completely. 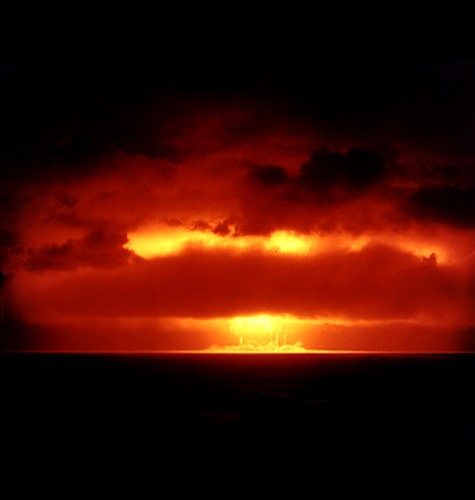 Although a small amount of fusion energy is released, a boosted bomb is not considered a fusion weapon since the purpose of the boost gas is to accelerate the fission chain reaction. Very little of the explosive energy produced is derived from fusion. 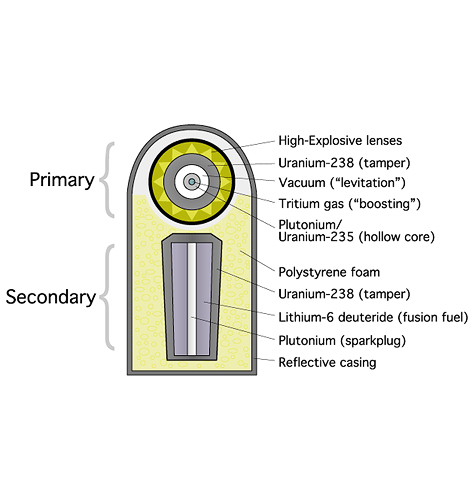 Thermonuclear weapons, or hydrogen bombs (H-bombs), produce explosions with yields in the megatons as opposed to kilotons. 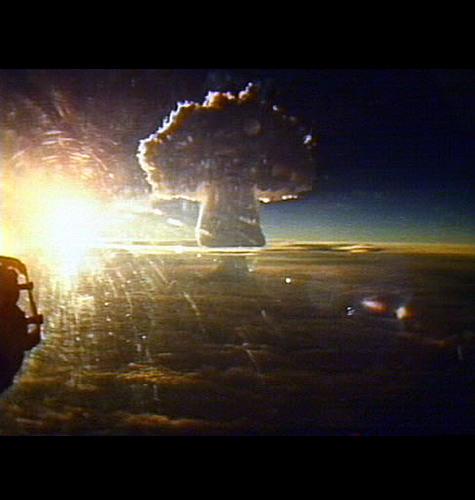 How much fissile material is required to build a nuclear weapon? 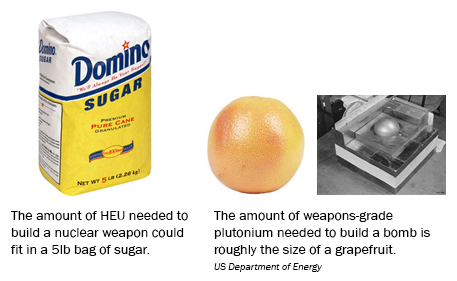 How difficult is it for a country to develop nuclear weapons?

Developing nuclear weapons is a complex endeavor, requiring substantial financial, technical, and human resources; however, these barriers are not insurmountable, and many countries could develop nuclear weapons if they chose to do so.

Acquiring fissile material is the most significant hurdle to a nuclear weapons capability, requiring a country to enrich uranium, produce plutonium, or illicitly procure such materials through theft or purchase.

How many countries have developed nuclear weapons?