1. What key activities and programs are included in the U.S. nuclear budget?

The U.S. nuclear budget comprises a variety of programs associated with nuclear weapons, nuclear nonproliferation, nuclear security, and legacy environmental and health costs. These programs are primarily managed by the Department of Defense (DoD) and the Department of Energy’s National Nuclear Security Administration (NNSA), with some other federal agencies involved in specific activities. The U.S. government spent approximately $42.3 billion on the nuclear budget in 2015. [1]

$3.85 billion
Reducing and eliminating threats from nuclear weapons and materials. Preparing for, and defending against, the use of nuclear or radiological weapons in the United States (DoD, NNSA, Department of Homeland Security, Department of State, and Department of Commerce)

$5.74 billion
Managing and cleaning up radioactive and toxic wastes left over from more than six decades of nuclear weapons production and testing activities (Department of Energy, Department of Defense, Department of Health and Human Services, and Environmental Protection Agency)
Click on chart for more information

2. Who is responsible for setting the annual nuclear budget?

Like all federal government programs, the executive branch is responsible for preparing the annual budget request and submitting it to Congress.

Each agency (Department of Defense, Department of Energy, etc.) develops its own budget with guidance from the White House Office of Management and Budget (OMB). Draft budgets are sent to the OMB for review and approval (changes are often made at this stage).

A consolidated budget is then sent to Congress early each calendar year, where committees and subcommittees in the House of Representatives and the Senate with jurisdiction over specific parts of the budget review it and receive testimony from officials at the relevant agencies about their funding requests (members of the public and lobbyists from various organizations also weigh in at this stage).

Once the bill is approved it is sent to the president to be signed into law.

3. Does the U.S. government know how much it actually spends on nuclear weapons?

Not comprehensively. That is why the cumulative numbers discussed in this tutorial are estimates. Although a number of U.S. government agencies track their nuclear spending, the government has never maintained a comprehensive account of total spending across all relevant agencies.

DoD—the agency that spends the most money in any given year—has never had a line item in its budget for nuclear weapons or weapons-related spending. This has made it very difficult, and at times impossible, for anyone—even the senior officials responsible for overseeing these programs—to know how much is being spent in any given year and how much has been spent historically.

Apart from DoD, most other government agencies (with the exception of the intelligence community) publish their annual expenditures. But there is no official line item that aggregates these costs, either annually or over time.

4. How do current versus historical U.S. estimated expenditures on nuclear weapons compare?

In the early years of the U.S. nuclear weapons program, costs were very high. In 1962, for example, nuclear weapons consumed nearly 18 percent of the total DoD budget. The percent of the DoD budget dedicated to strategic nuclear weapons fluctuated throughout the remainder of the Cold War, peaking again during the Reagan-era defense buildup. It then shrank steadily during the 1990s as large numbers of strategic weapons were eliminated, and continued to shrink during the 2000s as conventional military expenditures grew due to the war on terror, bottoming out at 2% in 2008. [2] 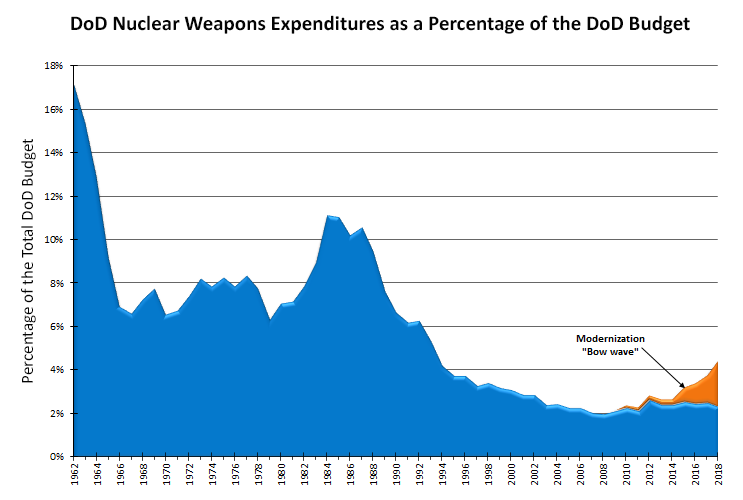 Today, DoD’s spending on nuclear weapons amounts to an estimated 2.5 percent of the department’s entire budget.

Today, DoD’s spending on nuclear weapons amounts to an estimated 2.5 percent of the department’s entire budget. However, these costs are expected to rise significantly—potentially totaling as much as $1 trillion over the next three decades—as the government attempts to develop and deploy a new strategic bomber and a new fleet of ballistic missile submarines, modernize its land-based ballistic missiles, and refurbish every warhead in the nuclear stockpile. In addition, the United States plans to rebuild large portions of its nuclear weapons production complex. [3] As for the Department of Energy, about forty-three percent of its annual budget is allocated to nuclear weapons and weapons-related programs. [4]

5. How does the size and transparency of the U.S. nuclear budget compare with other nuclear weapon states?