1. How does the U.S. government prevent nuclear proliferation and reduce the threat of nuclear terrorism?

Many organizations within the U.S. government undertake nuclear nonproliferation activities. A key component of the nonproliferation mission is nuclear threat reduction—preventing nuclear weapons, materials, technology and expertise from falling into the wrong hands.

Today, U.S. threat reduction programs are in place worldwide to:

Many threat reduction programs engage in more than one of these activities. 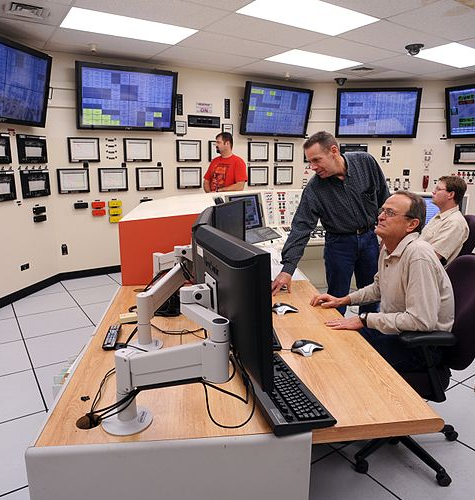 The National Nuclear Security Administration’s (NNSA) Office of Material Management and Minimization (M3), formerly the Global Threat Reduction Initiative (GTRI), oversees activities to improve nuclear and other radioactive material security worldwide. Most prominently, M3 has worked to reduce the use of, and improve the security of, civil highly enriched uranium (HEU) through reactor conversion, fuel repatriation and other activities. [1] As of 2016, M3 had verified the conversion or shutdown of 94 facilities that had previously used HEU. [2] 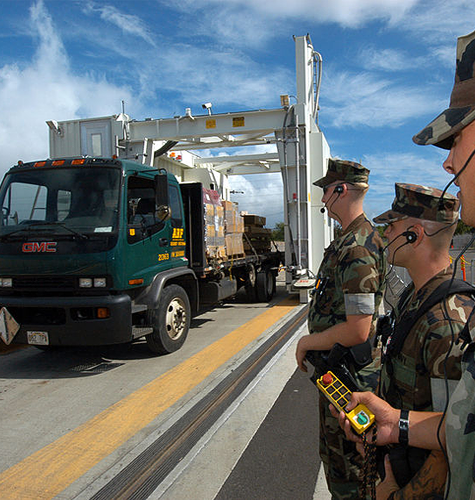 NNSA’s Office of Global Material Security [GMS] helps partner countries to “secure and account for nuclear weapons, weapons-useable nuclear and radiological materials, as well as to build capacity to deter, detect and interdict the illicit trafficking of such materials.” [3] GMS collaborates with international organizations such as the International Atomic Energy Agency (IAEA) to provide policy support on nuclear security guidelines, [4] and has partnered with states such as Moldova and Ukraine to improve border security through the installation of radiation detectors, in an effort to prevent nuclear smuggling. [5] 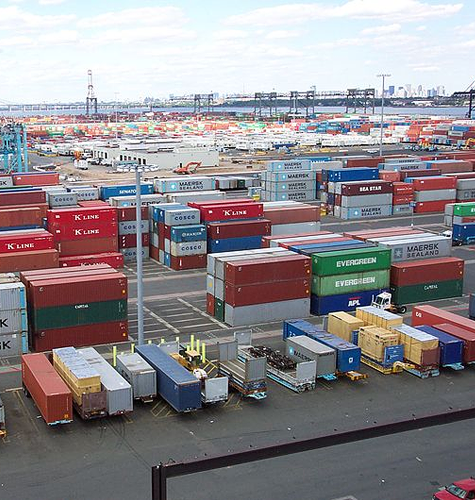 NNSA’s Megaports Initiative “works with foreign customs, port authorities, port operators, and/or other relevant entities in partner countries to systematically enhance detection capabilities for special nuclear and other radioactive materials in containerized cargo transiting the global maritime shipping network.” [6] Megaports installed Radiation Portal Monitors in 42 international partner countries’ ports. [7] Expansion of the program was scaled back in 2012 over concerns participating countries were not prepared to assume a sustainable maintenance program after the transfer of detection equipment provided by NNSA. [8] 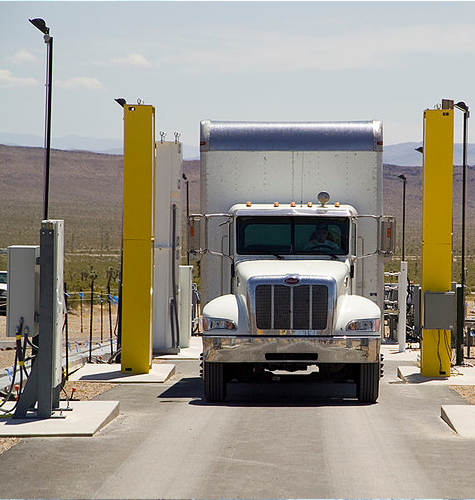 The Department of Homeland Security’s (DHS) Domestic Nuclear Detection Office is jointly staffed by DHS and the Department of Defense. The program works to prevent nuclear terrorism by improving domestic capabilities to detect, respond to, and attribute attacks in cooperation with domestic law enforcement. The Department of Defense offers services from the Defense Threat Reduction Agency (DTRA), which utilizes its advanced detection technologies to find nuclear materials. [9] 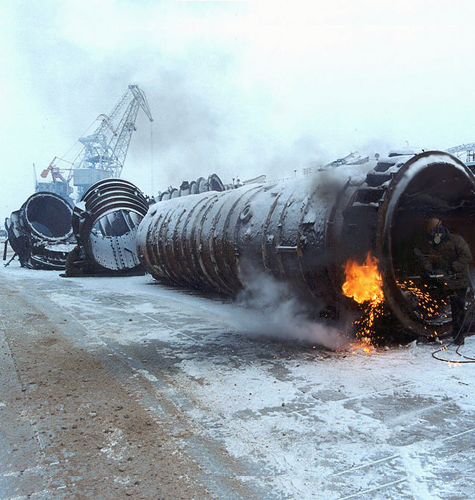 In November 1991, U.S. Senators Sam Nunn (D-GA) and Richard Lugar (R-IN) authored this innovative initiative to reduce weapons of mass destruction proliferation threats at the source following the collapse of the Soviet Union. Through the CTR program, Ukraine, Kazakhstan, and Belarus agreed to transfer all nuclear weapons on their territory to Russia, becoming nuclear weapons free states. CTR helped to deactivate more than 7,600 nuclear warheads, destroy more than 2,300 missiles, and secure 24 nuclear weapons storage sites in the Former Soviet Union, among many other successes. [10] 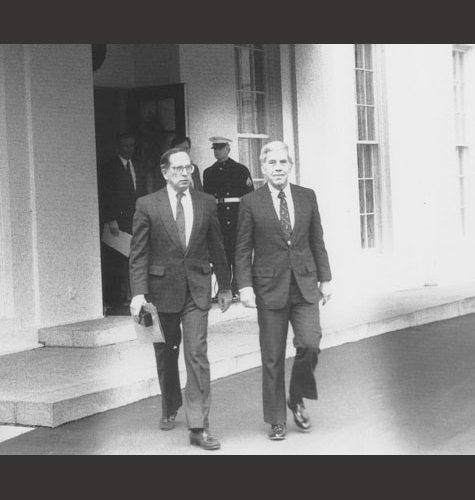 The Russian government rejected a proposal from the Obama administration to renew the agreement in 2012, ending 20 years of bilateral cooperation. [11] However, CTR had already begun to expand its activities outside of the former Soviet Union in 2004. The program continues to assist many other countries with WMD nonproliferation and nuclear security capacity-building. [12]

2. Which U.S. government departments and agencies are responsible for nonproliferation and nuclear threat reduction activities?

DoD, NNSA, and the State Department play the largest roles in nonproliferation and threat reduction and oversee the most significant programs. The Department of Homeland Security and the Department of Commerce also play key roles.

3. What percentage of the nuclear budget is dedicated to these programs? 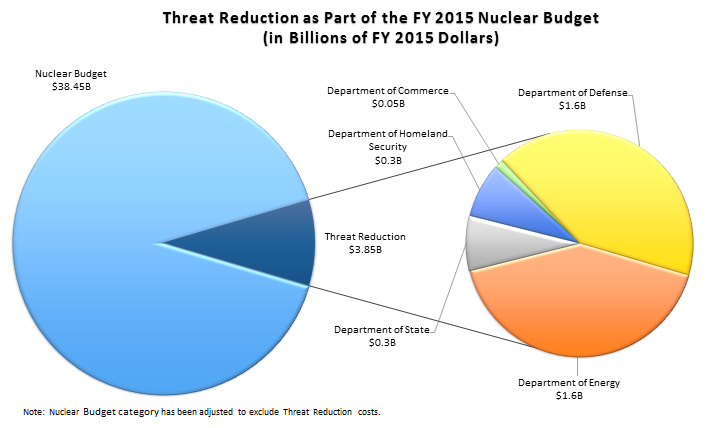 Despite President Obama’s early emphasis on nuclear security, and his administration’s self-imposed goal of securing all nuclear materials from terrorists, the FY2014 and FY2015 budget requests cut funding for securing nuclear materials by approximately 21 percent. [13] These cuts came at the same time as a significant increase in spending on U.S. nuclear weapons. [14]

The Obama administration has defended the nuclear security component of its budget requests, saying that many key nuclear security objectives have already been met, but many outside experts disagree. [15]

4. Are these programs cost effective?

Given the consequences of a nuclear terrorist attack, most officials and experts agree that the benefits of programs to mitigate the risk of nuclear terrorism far outweigh the financial costs. [16] If terrorists get access to a nuclear weapon or to weapons-usable nuclear materials, carrying out an attack becomes much harder for governments to prevent.

Nuclear and other radioactive materials are extremely difficult to detect, and given the volume of global trade and technical detection challenges, finding them is immensely difficult. For this reason, the cost effectiveness of projects like NNSA’s Nuclear Smuggling Detection and Deterrence (formerly Second Line of Defense) program, which installs radiation detectors at border crossings and seaports, is highly debated. For fiscal year 2016, the House Armed Services Committee recommended a budget of $336.8 million dollars for this program, a $90 million decrease from the previous year. [17]