1. What are the key activities related to maintaining the U.S. nuclear stockpile?

The National Nuclear Security Administration (NNSA) oversees an extensive nationwide complex to maintain the nuclear weapons stockpile. Although all of its facilities are owned by the U.S. government, they are operated by independent contractors.

Click through the story map below to learn about activities related to maintaining the nuclear stockpile and where they are carried out. 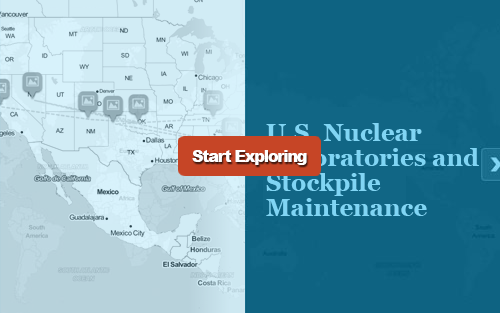 2. Why isn’t the U.S. Department of Defense responsible for designing and maintaining nuclear bombs and warheads?

The U.S. Army Corps of Engineers managed the original program to develop the atomic bomb, the Manhattan Project, for the Department of Defense (DoD). After World War II, there was a significant debate in Congress and among the scientists who had built the bomb about whether the Pentagon should continue to run the program. Many believed true civilian control over nuclear weapons necessitated moving the program for their development and maintenance outside of DoD.

The debate was settled with the passage of The Atomic Energy Act of 1946, which established the civilian Atomic Energy Commission (AEC). The AEC took control of all nuclear weapons research, development, testing, and production facilities—along with every nuclear bomb in the stockpile. 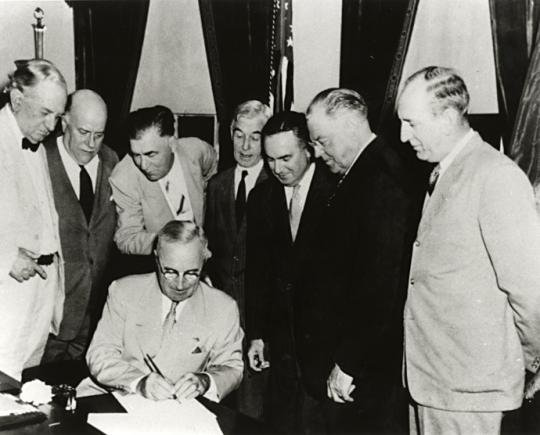 Since 1947, the AEC and its successor (NNSA) have had sole responsibility for funding and administering the development, testing, and production of nuclear bombs and warheads.

DoD and the military services continue to be responsible for all costs associated with nuclear delivery systems (aircraft, missiles, submarines, etc.). Since 1967, DoD has also controlled all operationally deployed nuclear weapons.

3. What is the relationship between the size of the U.S. nuclear stockpile and its cost?

The total number of nuclear warheads in the U.S. stockpile is currently lower than at any point since the late 1950’s. However, the 2016 NNSA budget allotment for weapons activities was $8.85 billion, [1] higher than the Cold War average of approximately $6 billion per year. [2] This is largely due to an expensive effort to modernize the stockpile’s aging warheads.

Producing the first nuclear weapons was astronomically expensive. In FY2016 dollars, the Manhattan Project cost about $36 billion through 1945. It produced three weapons (with a fourth in the pipeline), for an average cost of $9 billion per bomb. [3]

The costs per bomb remained in the tens of millions through 1953 as the technology was further developed and refined, and the U.S. made significant investments to expand production capacity. 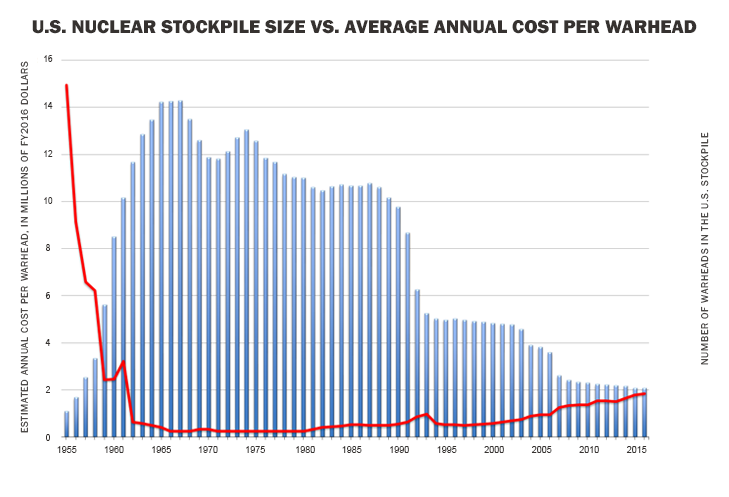 In the mid-1980s, average cost per warhead of production, research, development, and testing rose gradually under the Reagan-era strategic modernization program. [5] In the mid-1990s, costs increased significantly when the United States began implementing the Stockpile Stewardship Program, replacing production and explosive testing of new nuclear weapons with sophisticated simulations run on very expensive computers to monitor the safety and reliability of existing warheads. [6]

In 2016, with approximately 4,570 nuclear weapons in the stockpile, the average per weapon cost to monitor the stockpile and maintain all necessary support infrastructure was nearly $1.86 million, a little less than half of the 1961 cost. [7]

4. How much does the United States spend dismantling nuclear weapons?

Although the NNSA no longer discloses how many and which types of nuclear weapons have been dismantled, it publishes its costs for nuclear dismantlement. These have declined in recent years even though NNSA maintains a backlog of approximately 2,500 weapons waiting to be dismantled. [8]

The fiscal year 2016 budget for dismantlement activities was $52 million, a slight increase over previous years. [9]

For FY2017, NNSA asked Congress for a 33% increase in the dismantlement budget, in order to accelerate dismantlement with the goal of eliminating weapons retired prior to 2009 by 2021. [10] 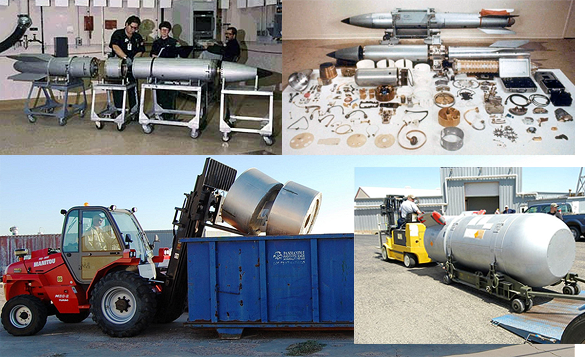 5. How much does warhead modernization cost?

NNSA wants to upgrade six existing nuclear warheads and gravity bombs in the stockpile through Life Extension Programs (LEPs). These programs are designed to repair or replace components of weapons, ensuring their ability to meet requirements while reducing the need to manufacture new weapons. Some of these LEPs are already underway, as are plans to modernize multiple major facilities involved in the manufacture, maintenance, and dismantlement of nuclear weapons. In 2015, NNSA estimated that LEPs would cost $41.7 billion between 2015 and 2039, out of a total $293.4 billion for stockpile and infrastructure modernization, science, technology and engineering capabilities, and other weapons activities. [11]

In 2013, the Obama administration unveiled its nuclear warhead modernization plan. Known as the “3+2” plan, it seeks to consolidate the nuclear arsenal from five thermonuclear missile warhead models to three, and from six types of air-delivered nuclear bombs to two. Nuclear planners hoped that this plan would reduce stockpile maintenance costs while maintaining strategic flexibility. [12]

The 3+2 modernization plan has faced considerable opposition, from non-governmental organizations such as the Union of Concerned Scientists, [13] and legislators such as Sen. Dianne Feinstein (D-CA). [14] They and others have balked at the cost of the plan, and believe that the government could save money with a more modest plan to upgrade existing warheads.

6. How accurate are long-term cost estimates for maintaining the nuclear stockpile?

Cost estimates are only as accurate as the data and assumptions used to generate them. In 2014, the Government Accountability Office (GAO) criticized the DoD and Department of Energy (DOE) 10-year budget estimates as incomplete and insufficiently transparent, and recommended reforms in their budget reporting procedures. [15] DoD and DOE have since provided greater documentation on how they arrive at their budget estimates. Partly because of these reforms, the 10-year budget estimate for sustaining and modernizing the U.S. nuclear weapons stockpile increased from $263.8 billion in June 2014 to $319.8 billion in December 2015. [16]

Many programs associated with nuclear weapons and managed by DOE or NNSA have fallen behind schedule and gone over budget, including a massive new uranium processing complex under construction at the Y-12 Plant in Tennessee, and a facility at the Savannah River Site to transform surplus weapons plutonium into nuclear reactor fuel.

Chart Source
U.S. Stockpile Size vs. Cost Per Warhead: Adapted and revised from Stephen I. Schwartz, ed., Atomic Audit: The Costs and Consequences of U.S. Nuclear Weapons Since 1940 (Brookings, 1998), pp. 559-63, and annual data from Department of Energy budget justification documents, 1997-2016.