1. What are the international legal prohibitions on biological and toxin weapons?

Legal prohibitions on biological and toxin weapons derive from two international instruments, the 1925 Geneva Protocol and the 1972 Biological and Toxin Weapons Convention (BTWC).

Agreed in June 1925 and entering into force in February 1928, the Geneva Protocol for the Prohibition of the Use in War of Asphyxiating, Poisonous or Other Gases, and of Bacteriological Methods of Warfare was the first international effort to control biological weapons. It prohibits only the use of biological and toxin weapons in war.

As of 2016, 140 countries have ratified or acceded to the Geneva Protocol. Many states have done so with reservations stating that they have the right to retaliate in kind if another state uses such weapons against them. Thus, the Geneva Protocol is effectively a no-first use policy.

Most legal scholars now consider the Geneva Protocols to be customary international law, and as such binding on all states regardless of whether they have ratified the treaty. [1]

In addition to banning biological weapons, the BTWC obligates its members to assist other State Parties that have been victimized by a violation of the treaty, and to “undertake to facilitate” the exchange of bioscience knowledge for peaceful purposes.

2. What challenges does the BTWC face?

3. What are the challenges of balancing peaceful uses of biotechnology with nonproliferation?

The BTWC contains provisions both prohibiting the proliferation of biological weapons (Article III) as well as committing member states to “the fullest possible exchange” of peaceful biotechnologies (Article X). States Parties have varying views on how best to balance these two goals. 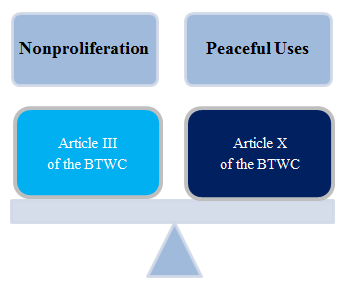 Some states, particularly members of the Non-Aligned Movement (NAM), see Article III on nonproliferation and Article X on promotion of peaceful use of biotechnology as equally important. They interpret Article X as an obligation for developed countries to share their expert knowledge with less-developed countries. Several states feel that developed countries have not fulfilled this obligation, and have called for the establishment of a formal mechanism for scientific cooperation. A few states also oppose the view that compliance with the BTWC’s Article III necessitates national strategic trade controls, which in their view restrict the free flow of biological technology and knowledge.

Other states view disarmament and nonproliferation as the primary goal of the BTWC. Therefore, the aim of Article X is principally to ensure that the nonproliferation goals of the treaty do not hinder peaceful activities. These states are generally supportive of strategic trade controls and view them as necessary for compliance with Article III.

4. Why is biodefense research often controversial?

Biodefense research is allowed under the BTWC. This activity, conducted by governments and the private sector, focuses on developing systems to detect, characterize, and respond to biological attacks. However, large-scale defense programs are often controversial.

5. How are new technologies transforming the biological threat?

Advances in the life sciences could have significant implications for the types of threats we face in the future and our options for dealing with them. Possible implications are depicted in the below diagram. 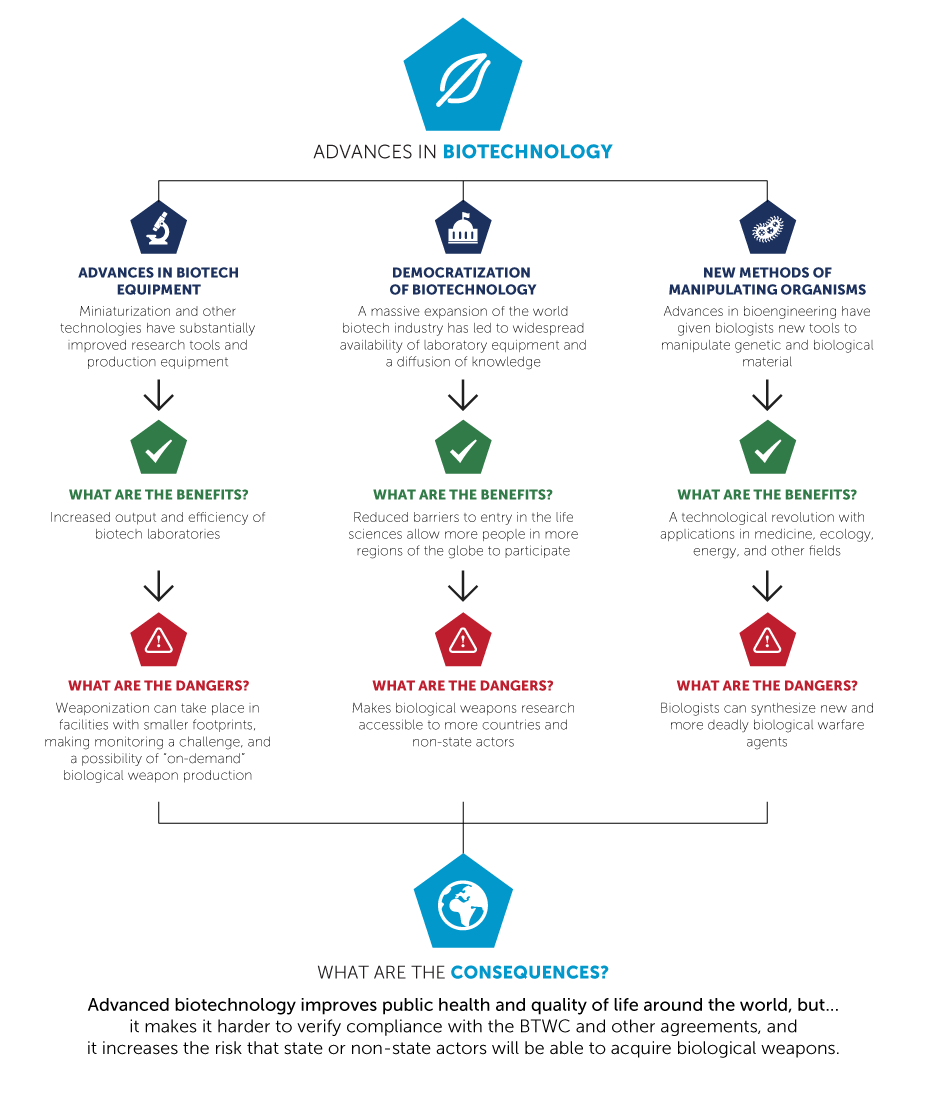