1. What is the nuclear triad?

The nuclear triad comprises three kinds of strategic nuclear delivery systems maintained by DoD—bombers, land-based intercontinental ballistic missiles (ICBMs), and submarine-launched ballistic missiles (SLBMs). Although the United States did not set out to build a triad, most analysts believe that having bombers, land-based missiles, and submarines strengthens deterrence. Others argue that the triad is an artifact of the Cold War, and that redundant capabilities are an unnecessary extravagance. 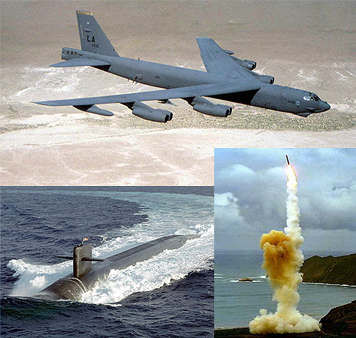 2. What are the annual operating costs of the triad? 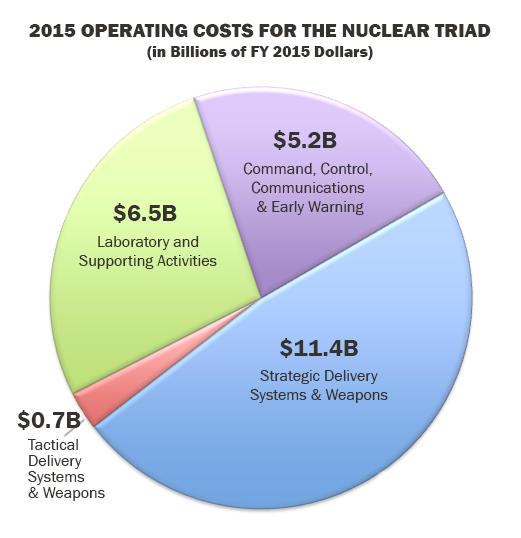 The DoD does not maintain a comprehensive budget for the triad, but an authoritative 2015 estimate by the Congressional Budget Office (CBO) pegs the cost at around $23.9 billion per year. [1] This figure includes the costs for warheads borne by NNSA, as well as for command, control, communications, and early-warning systems, but excludes any classified costs borne by the intelligence community.

3. What are the long-term costs of maintaining and modernizing the triad’s systems?

The Pentagon has warned that the cost of modernizing the U.S. nuclear deterrent will be challenging. “We’re looking at that big [nuclear] bow wave and wondering how the heck we’re going to pay for it,” said Principle Deputy Under Secretary for Policy Brian McKeon in October 2015. [2]

According to the CBO, over the next ten years the total cost of operating and sustaining U.S. nuclear forces is estimated to be $348 billion. [3] But the dramatic increase in spending known as the “bow wave” will occur in the mid-2020s, beyond the planning horizon for the CBO study. In its January 2016 study the Center for Strategic and International Studies described the bow wave as a self-perpetuating phenomenon that degrades the ability to modernize and maintain the U.S. nuclear arsenal due to funding instability, cost overruns, and inadequate acquisition oversight capacity, to name a few factors that will drive cost increases. [4]

A 2014 analysis by the James Martin Center for Nonproliferation Studies projects that over the next thirty years the total cost of maintaining and updating the triad could reach $1 trillion, with procurement costs for new systems peaking between 2024 and 2029. [5]

DoD is projected to spend an enormous amount of money replacing each leg of the triad with new systems over the next thirty years. The Navy plans to replace its fleet of Ohio-class ballistic missile submarines, which is estimated to cost up to $123 billion (in FY16 dollars). The Air Force currently plans to purchase the new B-21 strategic bomber to supplement the existing fleet of B-52 and B-2 bombers, at a cost of up to $106 billion. [6] In 2015, the Air Force decided to replace its entire fleet of Minuteman ICBMs, which could cost up to $70 billion. [7] (For background on ICBMs and other nuclear delivery systems, see the NTI Delivery Systems Tutorial). 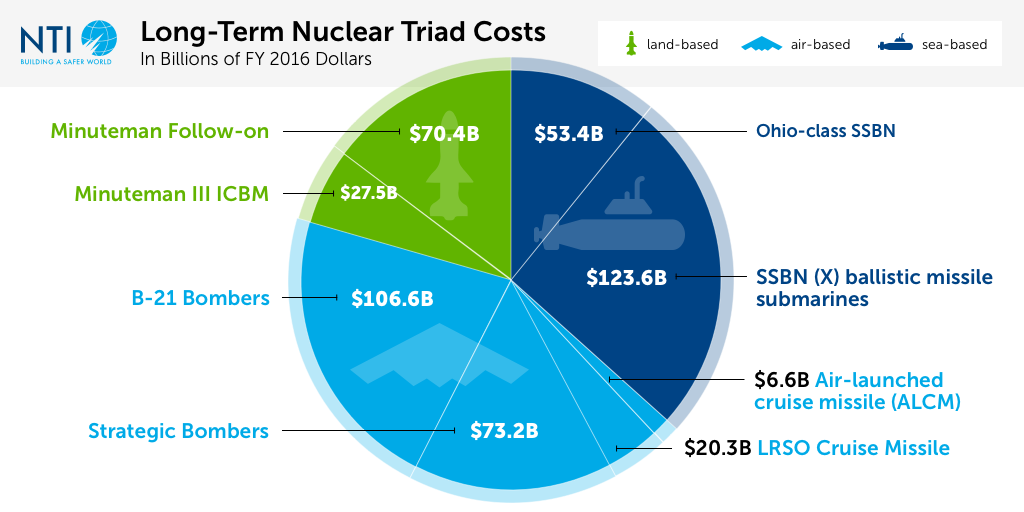 4. What are the costs of keeping tactical nuclear weapons in Europe?

The United States currently deploys around 200 B61 gravity bombs at six bases across five European countries (including Turkey), as part of its commitments to the North Atlantic Treaty Organization (NATO). [8] These tactical nuclear weapons are part of what is often referred to as NATO’s nuclear umbrella, extending U.S. nuclear deterrence to European allies.

Russia has about 2,000 tactical nuclear weapons. [9] These weapons are held in central storage locations for deployment with ground forces in the event of a military conflict. 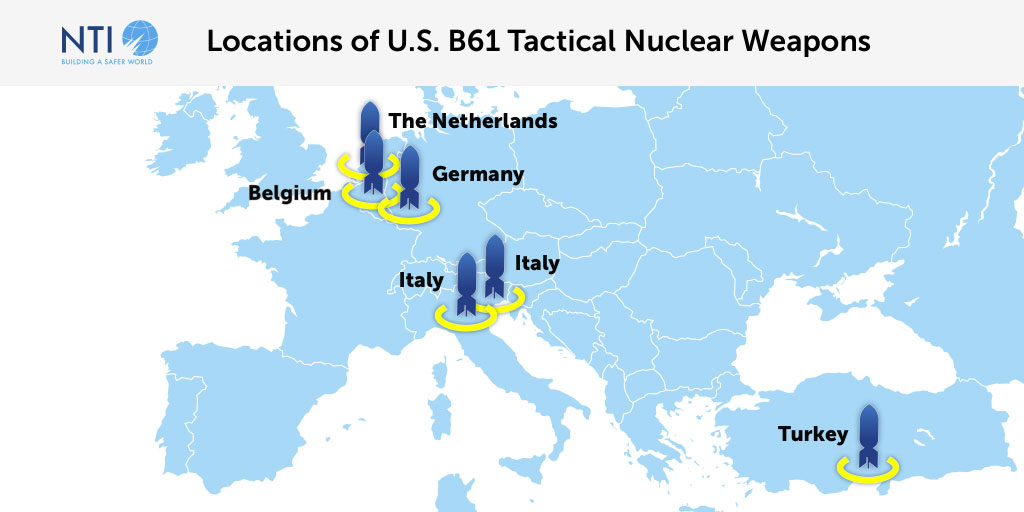 The CBO estimates the cost of stationing U.S. nuclear weapons in Europe to be approximately $700 million per year and $8 billion over the next decade. [10] This cost is shared between DoD and NNSA. [11]

NATO nations that host U.S. nuclear weapons bear many of the costs associated with the weapons. In addition to providing and maintaining aircraft and personnel, host nations are responsible for maintaining the facilities and infrastructure associated with forward-deployed nuclear weapons. These costs are difficult to estimate since they are paid out of national budgets. In addition to host nation support, NATO has collectively invested over $80 million to improve security for nuclear weapons since 2000. [12] NATO currently plans to invest an additional $154 million “to meet with stringent new U.S. standards.” [13]

As the existing stockpile of B61 bombs approaches retirement, NNSA and DoD are planning a life extension program for the B61 estimated to cost approximately $8.2 billion in FY2016 (in addition to the B61s deployed in Europe, the Air Force also maintains a smaller number in the United States for use by the B-2 bomber). [14] The Life Extension Program (LEP) is designed to replace or refurbish nuclear and non-nuclear components of each B61 in order to ensure their safety and reliability while minimizing the need to design or test new components. [15]

The Air Force is working on a program to equip the refurbished B61s with a new maneuverable tail that will significantly improve their accuracy, and enable them to be used against targets that would otherwise require bombs with more destructive power and higher yields. Total cost estimates for the project had ballooned from an initial estimate of about $4 billion to about $8.9 billion as of September 2015. [16]

5. What other Defense Department programs are essential to maintaining the U.S. nuclear triad, and what are their costs?

In addition to the delivery systems themselves, other programs are essential to maintaining a safe, effective, and reliable nuclear arsenal.

Photo credit
Header Image: The Nuclear Triad is a combination of nuclear forces by land, air and sea. Sources: All header images are from WikiMedia Commons.